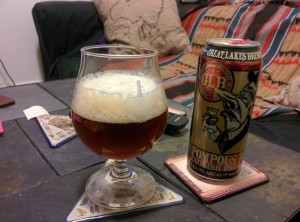 I get to review a beer named after me.

The fine folks over at Great Lakes Brewing have named a beer in my honour.

At least, that’s what Shawna tells me.

The Pompous Ass is an English Pale Ale that got my attention at the LCBO due to the amazing image on the can of what looks like a very sophisticated man taking a good solid whiff of the beer.

English pale ales are generally a lot less hoppy than their India brothers. You’ll find they have more maltiness to go with the hops kick. This beer for sure fits within that realm.

Strangely enough, there is no such thing as a true ‘English Pale Ale’ in the UK. They use the term Pale Ale to signify any bottled bitter. This beer would probably classify as an extra special bitter there. The English are not known for going over the top with hops, so even the highest level of hoppiness is still considered pretty mellow by our North American taste buds.

Appearance: Nice thick head. The beer is roasted nut brown and unfiltered. It’s somewhat opaque.
Aroma: hoppy and a bit floral. Not kick you in the ass hoppy, more a nice relaxed ‘how you doin?’ hoppy.
Taste:  Surprisingly light mouth feel, not as hoppy as expected. There are far more malty notes. It becomes a bit smokey after a few sips.
Aftertaste: More of that maltiness.
Overall: Very nice. It’s Light and tasty.