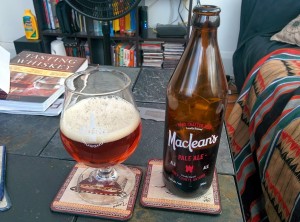 Today won’t you join me in tasting a brewery you have probably not ventured to. Maclean’s Ales!

To be totally honest I have never heard of Maclean’s. That statement might give away my age as the place has been around since 1993! According to the website it makes them the first independent craft brewer in Ontario.

The beer itself is brewed in Grey County, Ontario. A place I certainly have never been to.

According to the story the brewmaster went to the UK and motorcycled across the country. At one point he had run out of money and was given a chance to work for a brewpub in England. This is where he learned to love brewing. When he came back to Canada he started the brewery.

On to our tasting notes!