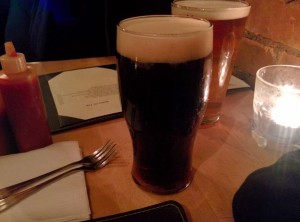 We had heard rumours that Hole in the Wall was a great bar. It’s across the street from Indie Ale House, a favourite haunt of ours, so it was strange that we hadn’t tried it yet. Not too long ago we decided to give it a go.

While there I decided to have an old favourite of mine: Neustadt 10w30 Brown Ale by Neustadt Springs. No, I am not repeating myself by saying Neustadt twice, it’s actually the official name. Most people just call it ’10w30′ though.

Neustadt is based out of the town of the same name and has been around since the early 2000s. 10w30 itself has won several brewing awards and the brewery seems to swim in awards from all over the province.

Appearance: Black or dark brown. Thick off-white head.
Aroma: Soft maltiness. Roasted nuts with a hint of coffee. A nice light mouth-feel which is strange since it’s named after engine oil.
Taste: More of that nuttiness. Bit of hops to round it off. Very well balanced.
Aftertaste: Brings that hoppiness to the front.
Overall: A really great brown ale. It’s nutty without being too overpowering. Went well with oysters.