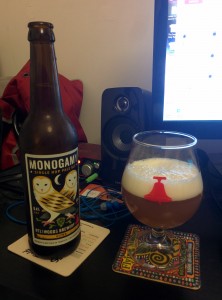 We have to admit something:

We are kind of in love with the Citra hop.

To the point that if it was a person the folks at Toronto Booze Hound would certainly fight over them.

At this point we have already tried the Karma Citra by Great Lakes, the Prospect Citra by Left Field and even the new Rainhard IPA that features Citra.

Which is why I was super happy when I found out Bellwoods Brewery did a Monogamy Single Hop IPA with Citra as the hop.

Monogamy is a series of beers form Bellwoods meant to show off individual hop varietals. They made a single recipe and then change only the hops. It shows just how different a beer can be with different hops.

Sadly this beer no longer seems to be available at either the bottle shop or on draft. You might get lucky and find a bottle at some better beer bars.

Appearance: Unfiltered and orange. Two fingers of white head that lingers.
Aroma: Those beautiful citrus aromas. Lime, grapefruit and orange. Small bit of bread from the malt.
Taste: Very tart and hop forward. The citrus will be the main showcase here but it’s undercut a bit with some nice malt. Quite refreshing.
Aftertaste: Bitter but light.
Overall: Another great showcase for citra!