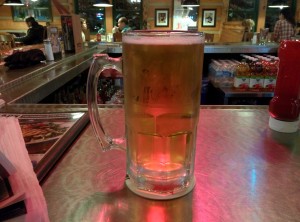 I had a Molson Canadian.

This isn’t too shocking a thing to say. I’ve had it numerous times throughout my life. Though it’s been a very long time since I’ve had one.

Today is the Super Bowl and Molson Canadian is probably going to be drunk by the gallon. Making today a fitting day to post this.

This being a Canadian booze blog, it kind of makes sense that review a beer that used Canadiana as it’s main advertising differentiator for a very long time. You might remember the famous ‘I am Canadian!’ campaign from a while back.

If you don’t remember, here is the ad that made it famous: https://www.youtube.com/watch?v=pASE_TgeVg8

Some people might be surprised to learn that Molson, the company that makes Canadian, is owned by an American company (Molson Coors), making the whole campaign somewhat moot.

Though it is brewed in Canada, so that’s good. I guess.

You might not be able to tell from the photo but I had the beer in a giant 1 litre sized glass that had been chilled. You can buy Canadian literally anywhere that beer is sold and in about any way you can imagine. The beer sits at 5% ABV.

On to my tasting notes:

Aroma: Almost none to speak of.

Taste: Light maltiness with a hint of hops. Exactly what you expect in a lager. Surprisingly earthy. Carbonation is obviously artificial. Super soft mouth feel. A good amount of sweetness gets in.

Overall: Nothing really wrong with it. Just no real flavour. Its kind of dull. Shawna mocked me for hours after learning I had one.