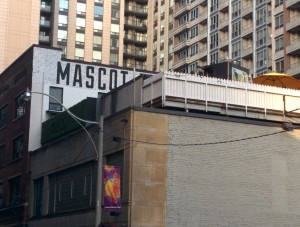 Yesterday I was finally able to check out Mascot Brewery down in the entertainment district. I say ‘finally’ because I tried once before but it didn’t exactly work out. More on that in a bit.

Mascot is a brand new brewery that sits on a rooftop next door to Second City on Mercer St. At the moment they contract their beer out of Duggan’s but have plans to brew on site.

We first attempted a trip to Mascot this Sunday. It was early in the afternoon and the Twitter account for them said to come by for brunch. We arrived at about 2pm and were very confused. We could see the giant rooftop sign but could not find the door to get in. We guessed that the proper door was a big one with no doorknob that said ‘the void’ or something on it.

Soon other people started arriving and were just as confused. After numerous phone calls and appeals to their Twitter/Facebook accounts we could not get any more info. In the end over 20 people ended up leaving confused and flustered. We never did get a response from their social media accounts, and we ended up at the always reliable Bar Hop nearby.

When I came the second time last night I discovered that we did have the correct door but for some reason on that sunny Sunday it was locked. On Facebook they post their hours as 11am until 5 on Sunday, so we were well within their hours. This tells me they kind of suck at online communication. Even a note tacked onto the door would have been helpful for the large amount of confused people that gathered there.

Here is their entrance: 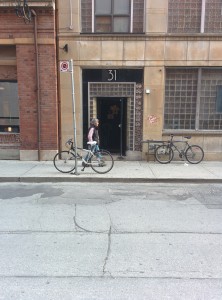 Once you do get through the door and up the stairs the place itself isn’t half bad. Lots of bright yellow umbrellas on a clean patio. They had DJ equipment set up but it was not running while I was there.

At the moment they only have two beers available: an unexciting lager and a hefeweizen. I tried the Hefeweizen first and was pretty impressed. Here are my thoughts: 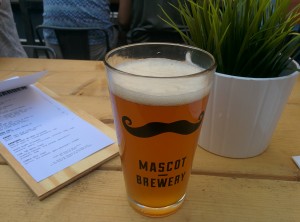 They also serve food. I had a burger that was served in a Styrofoam container, I really hope they switch to something a little more sustainable.

To be honest I am not fully impressed with Mascot just yet. They need to improve their communication and get some street level signage. A simple A-frame just outside the door would help a lot. I’ll check them out again when they start brewing on-site and hopefully some of their issues will be fixed.