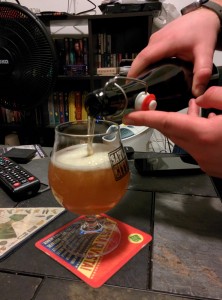 In the lead up to officially opening their new brewery in the east end, Left Field Brewery has been having ‘popup’ shops every weekend. These popups are probably exactly what to expect all the time when the brewery is open, they just don’t have enough beer to sell the bottles full time yet.

We happened to come by during one of their popups and had a great time. While there we purchased a few bottles of the only beer they had left in a bottle: ‘Maris.’

Named after the baseball player who beat Babe Ruth’s home run record, it is marketed as a to the point session beer that does it’s job well.

Generally an American Pale Ale should be hop forward with citrus notes from the American hops. This beer hits those notes perfectly.

You can purchase a bottle of Maris at the pop up bottle shops on weekends. It sits at 4.5% ABV which is higher than many would consider ‘sessionable’ but to each their own.