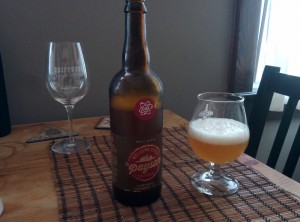 I’m not sure exactly when it happened but at some point between last summer and this summer Saisons have become hugely popular.

The Belgian style beer has been around for ages of course but suddenly all the craft breweries in Ontario have one. I’m not complaining though, this stuff is wonderful.

Also called a traditional ‘farmhouse’ ale these beers are generally light, easy drinking but somewhat spicy due to the belgian yeast.

Which is why I picked up a bottle of Le Paysan by Nickel Brook.

Appearance: Golden with thick white head. Unfiltered.
Aroma: Banana and strawberries.
Taste: Less fruit and more of a balanced taste. Bit of orange and a slight alcohol warmth. Light tropical bitterness. Some cloves sneak in at the end.
Aftertaste: Bitter and dry.
Overall: Refreshing and complex.