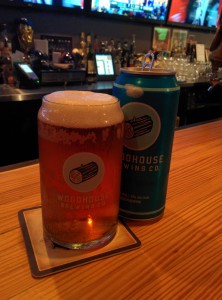 Where the hell did these guys come from? Here I was, minding my own business watching the Canadians come back from 3-0 in the playoffs when I noticed a strange logo on a glass.

The logo said ‘Woodhouse Brewing Co.’ My first thought was that it must be some kind of beer from the strange place known as ‘not Ontario.’

When I Googled them I discovered they are made right here in Toronto! Oh god! How did we miss them?

So on to what I discovered:

They are a contract brewer out of Etobicoke. Which makes me assume they are out of Cool Brewing Co. Later I confirmed that this is where they are made.

The company has been around for about a year so far and is available in a very large amount of bars around the city. I’m not sure how we had never seen or heard of them before. Makes me feel out of the loop.

Their first beer is a pretty basic lager. A safe bet but lets hope they try out a few new things in the future.