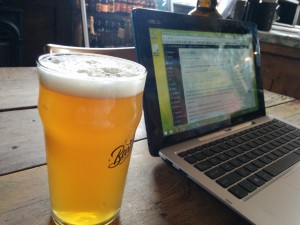 I’m sitting at Bar Volo right now and I just noticed they have Karma Citra on tap. That means I will most definitely be ordering it so I can compare my notes from the bottle of Karma Citra I had yesterday. Comparing tap and bottle variants is always interesting!

Karma Citra is a seasonal brew by Great Lakes Brewery.

The brewer themselves say that using the citra hop is ‘almost cheating’ and I have to agree with them. It’s one of the best hops available in this fair country and the beer reflects it incredibly well.

I wish they had more information on this release on the website but sadly they do not. It looks like the beer has been available for at least a few years and is most definitely an IPA.

Beer writers have been clambering over this beer since it came out with people like Jordan St John absolutely loving it.

Appearance: Unfiltered with a rich white head. I had deep gold or straw colouring.
Aroma: Lots of pine at first with a bit of melon. It’s very light and fresh and has some lime hints to it. 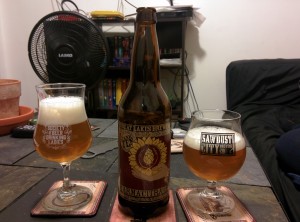 Taste: The pine really kicks in here and it’s much dryer than expected. You get nice earthy notes like moss and spruce. Some tangerine makes an appearance.
Aftertaste: Hardcore bitter hops. The hops overpowers everything after a bit.
Overall: A wonderful show piece for the Citra hops. I’m in love with this beer.