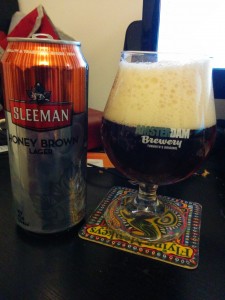 Well here it goes: I’m about to review a Sleeman product. Generally we focus on craft beers here but we do have to hit up the macros from time to time.

Sleeman is one of the largest beer producers in the province. It is owned by Sapporo which in turn also owns Unibroue over in Quebec.

I actually have a bit of a history with their Honey Brown (which by the way does use real honey). It was one of the beers I used to drink when I was around 19. I have a lot of fond memories of me drinking it. I should also note that most of the beer I drank back then was REALLY bad.

Appearance: Brown as expected. Filtered. Thick white head that stays well.
Aroma: Honey is certainly there, plus slightly roasted malts (which gives the brown colour). A hint of chocolate and caramel.
Taste: Very light mouth feel. The honey is very light. I pick up apples. Much less of the roasted malt that was in the aroma.
Aftertaste: This is where it gets a tad bitter, but not in a bad way. It’s short.
Overall: Impressed with this. It’s true to how they describe it and can certainly be refreshing.