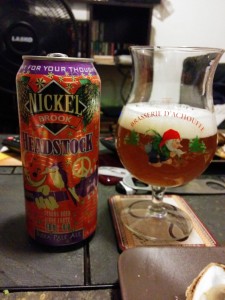 This is the beer.

I am not kidding when I say this.

This is the beer that got me into craft beer.

It was the first beer that made me realize that not all beers taste the same.

You see, like most folks out there, I grew up drinking Molson products that all tasted very similar. Sometimes a ‘dry’ version would be released that was slightly different.

Then I tried this.

This was different from lagers in every conceivable way. When it first hit my tongue it created an explosion in my brain.

So now I drink craft beers.

I should talk about the beer itself and now my infatuation with it:

This is Headstock IPA by Nickle Brook Brewing.

The beer is a nice strong IPA that clocks in at 7% ABV and you can purchase a tall can for just $2.85 at the LCBO. IPA if you haven’t become acquainted with the term before, stands for India Pale Ale. The rumour passed around was that it was a beer made to survive the long trip on ships to India.

The truth of the matter is that it was made to travel basically anywhere.

They are generally filled to the brim with hops. Some might call the style ‘taking bitter to whole new levels’ but beer lovers will be quick tot ell you it’s more ‘floral’ or ‘tropical’ and surprisingly sweet. I tend to agree with the latter.

Here are my tasting notes:

Aroma: Hops and flowers. Bit of fruit like mango mixed in there.