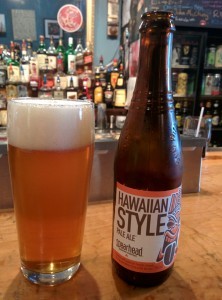 I have to admit: I’ve been a fan of Spearhead for quite some time. While I am not exactly happy that they don’t say on their site who they contract brew out of, the beer itself has been consistently good.

The Hawaiian Style is a pale ale made the ‘Hawaiian way’ according to the marketing. Which basically means they add pineapples to the brewing process. While they say their whole goal is to break the rules, mixing pineapple with tropical hops can certainly seem like something that would work.

I had this at Dave’s on St Clair in a pretty normal glass. Soccer was on TV and that had me a bit riled up.