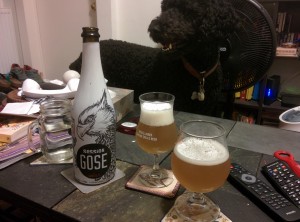 The ‘Local 7’ are a collective of Toronto’s ‘best’ beer bars (according to their website, not us) that got together to support the Griffin SESSION Toronto Craft Beer Festival. The bars involved are: The Auld Spot Pub, Bar Hop, Brydens, Bar Volo, C’est What, The Only Cafe, and WVRST Beer Hall. A good list to say the least.

This year they released a Gose unto us via the LCBO and their individual bars. For those unfamiliar a Gose is a German wheat beer that is generally sour. It usually has salt and coriander added. While the LCBO has a traditional Gose available, each bar of the 7 have their unique variant of it.

If you have never had a Gose you can compare the style to a German Witbier.

The beer sits at a very sessionable 4.2% ABV and can be picked up at the LCBO.

Appearance: Unfiltered. Somewhat yellow. Head fades fast.
Aroma: Coriander. Soft wheat backbone is bread like.
Taste: I like the wheat backbone. Much more bread like. Not as sour as expected. Cereal like. Rice krispies.
Aftertaste: Almost none.
Overall: Somewhat complex and tasty. Not really as sour as I expected, must be that citrus.