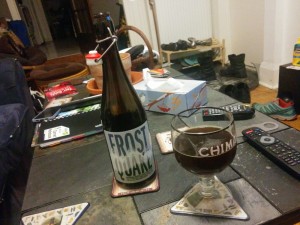 When we picked up the bottle of Frost Quake we didn’t think too much of it. We knew we would probably review it since it was something we hadn’t tried yet, but what we didn’t realize was that it would be our first time reviewing Wellington Brewery.

We LOVE Wellington, how in the hell did we miss it?

In fact, I used to live in Guelph and have certainly visited them more than once. Not to mention have had more than my fair share of their beers.

The beer itself is a bourbon barrel aged barley wine. I have to say, it’s one of my all-time favourite styles. If anything because of the massive differences in taste you can find within it.

Frost Quake is a 9.8% one-off that is available at the LCBO for $11.95 a bottle. It’s a large bottle but the price might have some people second guessing.

We shared the bottle between us. I personally used a challice, cause I’m awesome like that.