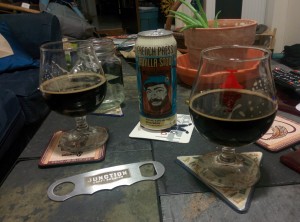 For some odd reason Double Trouble Brewing does not list their vanilla stout on their website. Is it because they are ashamed of this beer and hope that if they don’t list it on their site it will go away forever? Did they come to the conclusion that having some french dude’s head on the can was a bad idea and didn’t want to publicize it? Probably not.

They probably just haven’t updated their website in a bit.

Paul, their head brewer, started brewing when I was BORN. I want that to sink in for a bit. This guy has been making beer since before the geek who is writing this was even on the earth.

Double Trouble is probably best known for their IPA, ‘Hops and Robbers.’ It has a great name and an even greater taste. It’s winter though and I was craving a stout, so out of our living room beer fridge (named Bev) came a vanilla stout. I’m pretty sure Shawna picked this up simply because of the can design. It really is beautiful.

On to tasting notes:

Aroma: Coffee and chocolate. Like smelling a fresh mocha.

Taste: Light mouthfeel, you can pick up vanilla for sure with a bit of sourness. You get more malt at first but then hoppiness shows up.

Overall: A great beer that will certainly be gracing our fridge again.