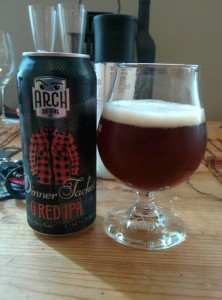 We like red ales. The main issue is that their simply aren’t many of them about in Ontario. While Quebec has a wonderful selection, here we really only have one or two. Which is why we were excited when Arch Brewing announced their first beer as a red IPA… Well… We were excited by the red part. A brewery starting with an IPA isn’t exactly new.

Arch Brewing Co is a contract brewery that gets their beer made at the Wellington brewery in Guelph, Ontario. We are big fans of what comes out of Wellington so it’s nice to see their contract brews stick to the same quality.

Appearance: Deep red with a surprisingly white soft head. Seems to be unfiltered.
Aroma: Pizza dough and chocolate hit my nose first. A bit of mango maybe as well.
Taste: Caramel first and vanilla. Very sweet at the tip of the tongue. Wants it rolls back the hops kick in with mango and grapefruit. Very unique I must say.
Aftertaste: the longering hops bitterness. Nice and dry.
Overall: A very unique but enjoyable beer.