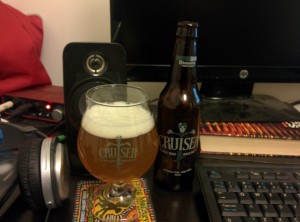 When it comes to hoppy beers, Amsterdam really has a lot to offer. You can get their famous Boneshaker at basically any LCBO and Fracture is certainly a hell of an IPA.

Today though I am sampling a brand new beer with a strange new concept:

Session beers are making a real comeback here in Ontario. They are easy drinking beers that generally have low ABV’s. The idea is that it’s a beer you can drink more than one pint of. You can see the obvious benefit for brewers: you buy more than one pint.

As you can image, the mouth punch and hardcore ABV of both Fracture and Boneshaker make it hard to drink a lot of them in one sitting.

It’s a light ABV beer that still packs a wallop to your mouth. Which is why I am not sure if I would call this sessionable… As the flavour might be too much after a pint or two.

You may notice in the photo that I have a ‘Cruiser’ glass. This is a glass they were giving away if you purchased a 6-pack during their launch weekend, and we happened to be in the area of their Leaside brewery. Me being easy to please, I had to buy a 6-pack. Also YES, I did put an Amsterdam beer on a Flying Monkey’s coaster. Deal with it.

You can purchase cruiser at Amsterdam in a 6-pack or on draft at various prices, it is currently available at the LCBO and direct from the brewer. The ABV is 4.9%.

Appearance: Light orange. Reminds me of grapefruit. Relatively thin head. Unfiltered.
Smell: Strong flowery hops. I can smell grapefruit but that might just be because of the previous comment on appearance. Very fruity.
Taste: Sweet and hoppy. Strong character but light mouth feel. More of that flowery flavour. Bitter on the back of the tongue.
Aftertaste: Just pure hops.
Overall: An enjoyable ale. Not sure if I would call this ‘sessionable’ as the flavours are rather strong compared to say a lager, but I can certainly enjoy it.