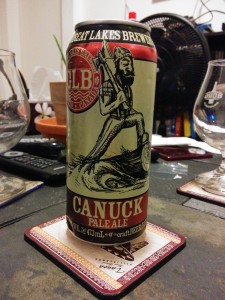 Ever since I saw the super stereotypical image on the front of the Canuck Pale Ale by Great Lakes Brewery I had to drink it. Something about a lumberjack just brought out my Canadian pride.

This beer is an American style pale ale which are generally lighter than the currently fashionable IPA’s. The drink was sampled in balloon style glasses (our favourite) and shared between the two of us.

Lets get on to the tasting notes:

Aroma: Citrusy hops like any good APA. Hint of strawberry. Bit softer than others.

Taste: Less sweet and less hoppy than expected from the smell. A mellow APA which is nice. Good way to introduce newbies to good beer.

Overall:  It’s a good APA and I’d certainly get it again. I can imagine its really great on tap.