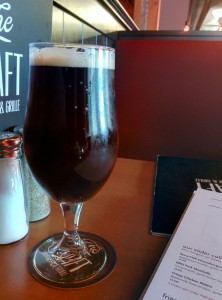 I really like how that photo over there came out. It’s like a professional shot. Maybe the guys at Old Flame can use it for marketing or something.

I had this beer at The Craft in Liberty Village. They have 120 taps so it’s always hard to decide what I want. I choose Old Flame simply because I had never tried them yet.

Old Flame themselves are based in Port Perry, Ontario. They only opened their doors last year so they don’t have too much to offer yet.

This beer is described as a Munich Dunkel style Lager. Meaning is should be very malt forward but easy drinking and light.

This beer is NOT available in the LCBO but can be found at bars across the city. It sits at a sessionable 4.8% ABV.

Appearance: Dark brown. Looks like soda. Off white head.
Aroma: Chocolate and vanilla hit before anything else and seem to disguise any other aromas that might be there.
Taste: Very light mouth feel but lots of flavour. Roasted malts bring out more vanilla and almost marshmallow. Some apple.
Aftertaste: Soft sweetness. Short and dry.
Overall: A good example of the style. I’ll probably have more.