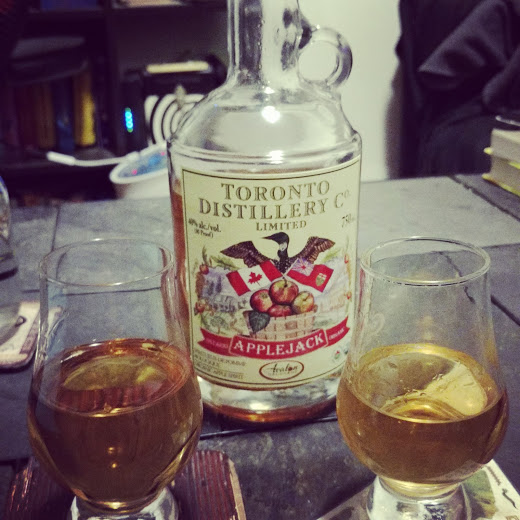 We live in the West End of Toronto and because of this we have a pretty regular path we take that goes through Rainhard, Junction Craft, Toronto Distillery Co and Indie Ale House.

During our most recent round of this trip we picked up a bottle of Apple Jack by Toronto Distillery Co. Jesse has been talking to us about this since they first started plans to make it so it’s exciting to finally give it a proper sampling.

We asked them the best temperature to serve it at and they replied simply ‘as you wish’. We went for room temp. We also opted for Glen Cairn glasses as this is as close to a scotch as any other drink we might have.

This is one of the first spirits to come out of Toronto Distillery Co that has actually been aged in barrels. Hopefully we get more and more aged spirits, I need my hint of oak!

Apple Jack is only available directly from Toronto Distillery Co. It sits at 40% ABV and costs just $39.82 for the bottle shown in the image above.