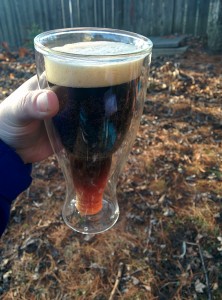 Spring finally showed up this weekend, in one glorious burst of warm sunshine. We took advantage by popping into Louis Cifer for some drinks after bottling lots of wine at Fermentations a few blocks away. Louis Cifer finally obtained the paperwork necessary to brew onsite, unlike the first time we went to Louis Cifer. We decided to give a few flights a shake (4x 5oz pours for $10) to test out the on-site production and bring home a growler from the store to give it a fair shake. I am definitely routing for this newish brewpub’s success – I used to live around the block when I first moved to Toronto 5 years ago, and I would have loved to have something like this nearby. (I used to live in walking distance from Dieu du Ciel, forgive me.)

I enjoyed the American Brown Ale with a steak sandwich served rare at the brewpub, and in a double-walled glass at home on the patio. It was great having our first backyard beer of the season – we were worn out from a 3 hour walk with the new dog (ok – 1 hour of walking, 2 hours of him barking at every possible distraction in the world – sorry neighbouhood) and we were lulled into a wonderful relaxing evening while the neighbours roasted lamb in the backyard for Orthodox Easter. It’s not quite warm enough yet to get into the pilsners and lagers, but it was definitely too warm yesterday for a stout. A brown ale is right up my alley in the spring. And we finally used the beer glasses Kole’s brother got us for Christmas a few years ago.