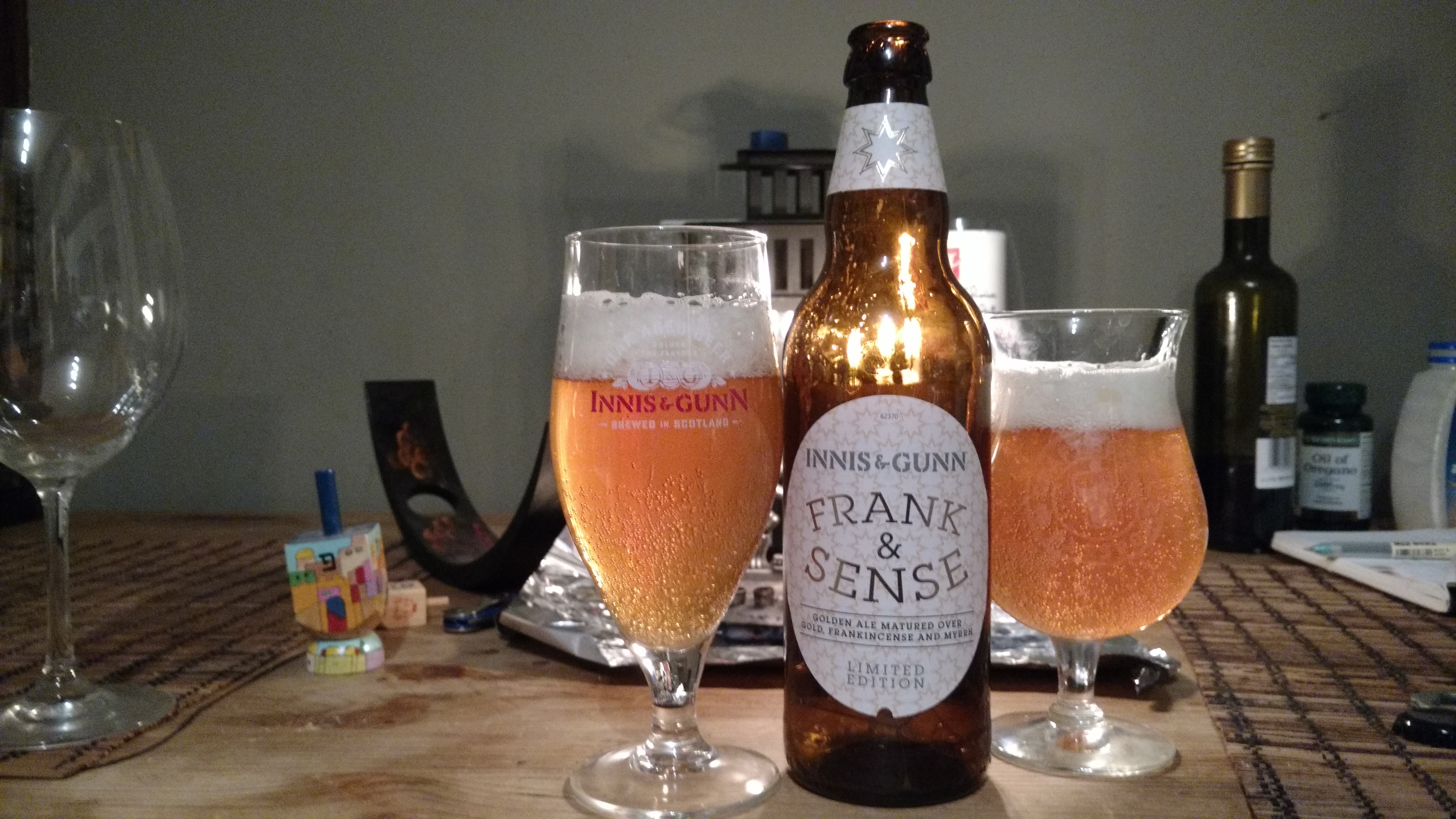 Night 5 already. I’ve put on a pound or two from the latkes, and lets face it, from this marathon of beer. I’m quiet for months at a time, and now I’m in the middle of my annual #8BeersOfChanukah craziness.

Normally we write about Ontario produced beer. But this is Chanukah so I break the rules and go a little rogue, and tackle all the fun things in my fridge. Most years I make a spectacle of going to the Summerhill LCBO and spending an afternoon curating the list. This year, you get a hodgepodge of whatever I feel like drinking cause that’s how I roll.

Enter a Scottish brew in honour of Kole’s Scottish heritage, Frank & Sense by Innis & Gunn. They send us beer every now and then, and I never honestly figured out why since we don’t really cover imports. But thanks for the delivery, beer fairy! This one came from their rep, and a 500 ml bottle retails for $7.95 at the LCBO. Why? Cause it’s matured over gold, dammit. Gold, frankincense and myrrh. I really hope 3 very wise men delivered this to my home, bearing gifts of gold, frankincense and myrrh cause that would really add to it.

This is a limited edition release. I thought it was fitting to enjoy it in Kole’s Innis & Gunn glass, a relic from our first Christmas together when I was busy trying to teach him about beer. I got him one of those gift packs with 3 assorted Innis & Gunn bottles and a glass. What do you get a guy that you’ve only been dating a few months, anyhow?

Taste: Palate is much stronger than the aroma. Metallic taste dominates – reminded me of a copper penny? Lingering baking spices.

Tipsy Shawna note: “Boy, you can really taste the myrrh!”

Tipsy Kole: “I’m not sure what myrrh tastes like.”

Tipsy Shawna: “A bit like frankincense with a lot of myrrh.”

Tipsy Kole: “Maybe you should step away from the candles before we burn the house down?”

So my notes just have the word myrrh underlined a bunch of times.

Aftertaste: Fairly grassy from the hops. Really balances the myrrh.

Overall: Drink this with 3 wise men as you flee persecution in the desert. Wait. Wrong biblical storyline for Chanukah. Split it with your 3 wisest uncles.