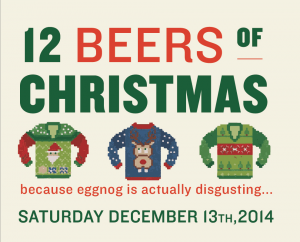 The 12 Beers of Christmas by the Gladstone hotel was an event I had looked forward to all year. It’s one of the very few beer events where you don’t have to buy tickets. Basically, you pay $10 to enter and then sample all the beer you want.

Last year when we went I was invited by Shawna. She had told me it was a beer event but not that it was unlimited samples. I have to say, it was a very pleasant surprise and a wonderful evening. We discovered breweries we hadn’t tried before and had a great time laughing at all of the ugly sweaters.

This year (2014) was slightly different.

On the Facebook page they had created for the event people had badgered them about being able to pre-purchase tickets for the event.  Last year it had only been cash at the door. They eventually folded and offered tickets through Event Bright. While this is incredibly convenient it ended up causing issues for basically everyone.

When we arrived the night of the event we were saddened to see a MASSIVE line outside of the Gladstone. We assumed this was for people who had not purchased tickets but when we asked someone in line we discovered it was for everyone. They had one line for both people who had tickets and those who wanted to buy tickets.

This is an incredibly inefficient way to do things. People with tickets should not have to stand around and wait while those without tickets pay.

Eventually they realized the problem and split the line in two. This lead to the line becoming WAY shorter and moving a lot faster.

In a 3-hour event we got in over a half hour late even though we arrived early. This means we only had 2.5 hours to enjoy the beer.

While I need to stress that I LOVE that this event is unlimited sampling, and the cheesiness of the sweaters and overall atmosphere was amazing, I do have some other complaints to make.

The first was the lack of craft brewers. While it was nice to see Junction, Black Oak and other favourites there, many of the small guys we discovered last year were not there. This could be because of a few reason but the conspiracy theorist in my brain thinks it may be they raised the rates to have a booth.

The other was that of timing. As I said, we got in about a half hour late on a 3 hour event. The event was supposed to close down around 10pm, but for some reason all the breweries l 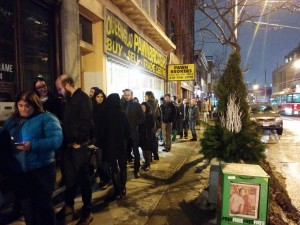 eft at around 9:30. This could be the brewers fault, they could simply have run out of beer, but that seems a bit strange seeing they ALL stopped at the exact same time.

This means we lost another half hour. Meaning we got only 2 hours of event time in what was supposed to be a three hour event.

I don’t want this review to be ALL doom and gloom though. One good thing they did over last year was to expand the space so that there was far more room to move around and a lot less crowding. They also made sure to limit ticket sales so that the crowding was kept to a minimum. That was one complaint I’d had the year before.

I also got to try a new beer at the event. Black Oak had bottles of their Nox Aeterna, a beer that had only been released one week before. Will be reviewing it once I can take proper tasting notes on it.

As I mentioned above, I did enjoy the atmosphere. People were dressed in the ugliest Christmas wear they had, the DJ was spinning some of the cheesiest Christmas music I have ever heard and the TV’s were all playing classic Christmas clips and movies.

Overall I have to say I had a lot of fun. I will probably end up going again next year. I do hope they get better organized with the lineups and tickets and are able to get more craft breweries interested.