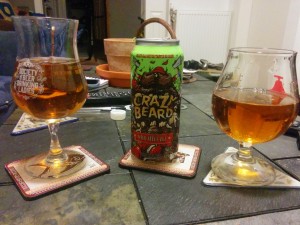 UPDATE: The LCBO has moved this product to the beer section.

When we picked up our can of Wild Apple Ale by Crazy Beard we were a bit confused. You see, the LCBO had them in the Cider section.

Yet the marketing called it an Ale.

Things became a little more clear when we took a look at the ingredients. Wild Apple Ale has apples and barley but no hops. The LCBO has some strange rule that requires all beer has hops (I heard a story that Beaus got in trouble with this when they released a hops-free Gruit a while back)

Since Wild Apple Ale does not have any hops, they must be called a cider by the LCBO.

We also noted that the ingredients list included sugar. At first I assumed that this was for bottle conditioning but then realized I’m an idiot for two reasons: This was released in a can, not a bottle and the first ingredient is carbonated water, meaning they added the carbonation themselves.

This had us a bit worried as we generally prefer drier drinks and if they are adding sugar to apples and barley they must be going for a super sweet flavour.

Somehow Gerry Dee seems to be involved in this. On Twitter he says it’s a new ‘venture’ for him. Not sure if he is just an endorsement or if he is an investor.

I’m a fan of the visual style. First of all, as a former beard owner I must admit it reminds me of the good times me and my beard had. I also just like the imagery used on the can and website. It’s fun.

Appearance: Clear and golden. Darker gold. No head. Copper colour. Looks like cider.
Aroma: Strong super sweet apple smell.
Taste: More dry than expected at first but then the sweetness really builds. Light crisp apples.
Aftertaste: It gets sweeter. Much sweeter. You know when you eat something spicy and that spiciness builds so much it starts to hurt? It’s that level of sweet.
Overall: Shawna really did not like it, she found it far too sweet. Tastes a bit like  sourpuss. Many will love it but too sweet for us. Tastes a bit like a lollipop. Shawna tasted aspartame in it. It’s not listed as an ingredient but it has that same artificial flavour to it.

One comment on “Wild Apple Ale by Crazy Beard, a Review”