This morning I did what I do almost every morning: I picked up a copy of Metro Toronto. Blazened on the front page was this: 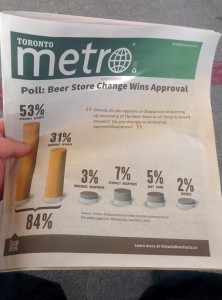 First of all, it’s possible that a lot of people out there will believe that this is a news piece written by the Metro when in fact it is a paid advertisement. I’m going to ignore that in good faith and assume they didn’t think it would confuse people.

What I want to focus on is the content itself and more specifically, the question posited.

You see, it asked people if they believe the recent changes made by the Beer Store are good.

But none of us were arguing that.

The actual comments made by craft brewers and beer writers were more like:

“Having one representative won’t give us any real voting powers. It is just symbolic,” – Kensington Brewing Company

“Dear @mybeerstore, it appears that neither the craft brewers nor the people of Ontario want your meager handouts. We want real change!” – Stephen Beaumont

That doesn’t sound like they are against the change, it sounds like the change is too little too late. Or as I would describe it: more of an olive twig than an olive branch.

The Beer Store is trying to change the conversation and focus on the fact that the change is positive. In reality, we need a much more substantial change to the entire system.

Or as Ben Johnson put it:

People doing the right thing don’t need to take out ads that look like headlines to convince everyone it is right. pic.twitter.com/rciVBnKbHj