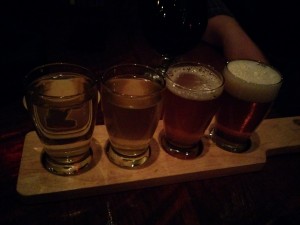 West Avenue Cider has been turning some heads in a burgeoning Ontario craft cider scene. This hard cider, crafted from 100% Ontario heritage apples, took home the prize of Best Cider in Ontario by the Ontario Craft Cider Association this year.

I had a 5 ounce glass on tap as part of a sampling flight at Bar Hop (second from left, pictured). This was my second sampling of cider on this particular evening, I also sampled Spirit Tree‘s Draught Cider.  For beer, I enjoyed a blind sampling of Bellwoods Brewery‘s Witchshark and Indie Ale House‘s Cockpuncher, but let’s focus on West Avenue Cider for now.

We might have had the opportunity to sample them at Toronto’s Festival of Beer last summer, but we’re not entirely sure. Our record keeping from the event wasn’t great.

West Avenue Cider is not yet commercially available, but you can find it in select bars and restaurants from Ottawa to London. They make three year-round staples, with some intriguing limited editions and one-offs. They’ve even hinted at an iced cider in the works for the near future. I’ll need to give that one a sip if I find it.

Appearance: Very clear golden colour. Lighting at Bar Hop is not conducive to get a good feel for the appearance, but I’ll forgive them since the selection is fantastic.

Aroma: Very strong apple aroma. Smells like your car when you’re driving home from apple-picking, and someone is sneaking a snack of a fresh, crunchy apple.

Taste: Light on the palate, with a surprising bitterness. More bitter than I like my ciders. Tart initial taste, wet mouth feel.

Overall: I like cider as a palate cleanser between opposing and strong beer styles, or to finish off after a rich meal. I’d like to give them a try with one of their bottled products instead of a draught pour. I’d order them in a restaurant if I was not overly impressed with the draught beer offerings, but I don’t think I’ll seek it out again until the summer. Ciders work well on the patio or by the campfire.