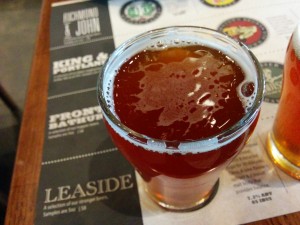 This morning I saw a flurry of activity on Twitter surrounding the Amsterdam BrewHouse. It seems they were hosting a Conservative Party function that happened to have Steven Harper show up. Some people were saying they would avoid Amsterdam because of this.

This particular issue I don’t really think is THAT big of a deal. Chances are they would be happy to host the Liberals or anyone else who offered them money but it reminded me of other issues that seem to be plaguing them:

Just yesterday the MLCC (The liquor licensing agency in Manitoba) recalled a bunch of Amsterdam’s ‘Sweetwater Blood Orange Radler’ due to exploding cans. It’s possible this is just one bad lot that was sent to Manitoba but I’m sure a few of us in Ontario are looking at those cans with a little bit of worry.

Then there is what we discovered a few days ago: Amsterdam BrewHouse got a yellow card from the City of Toronto. Some of the infractions include: employees failing to wash hands, failing to ensure food is not contaminated/adulterated, and failure to thoroughly cook hazardous food(s). It looks like they have been re-reviewed and ‘fixed’ these issues but it certainly does not make me feel good about eating there.

Each one of these could be considered a small issue but the fact that all three hit within the same week is somewhat frightening.

One bit of good news: There might be a shorter line to get into the BrewHouse!