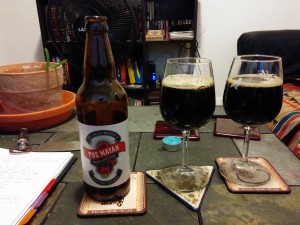 The Mayan calendar predicted that the world would end on December 21, 2012 (or at least the 13th b’ak’tun would end). This clearly did not happen but we were a little worse for the wear today following Indie Ale House’s Stout Night yesterday and kind of hoping for the end of the world. We decided the best way to celebrate this anniversary of the world not ending and the winter solstice would be to imbibe in The Mayan Chocolate Chipotle Stout by Yorkshire brewery The Ilkley Brewery. Might as well keep up our stout weekend for the 6th night of Chanukah, right? And to continue with good tradition, we had Chinese food for breakfast. I have no shame. My ancestors would be proud.

This little guy charmed his way into my basket at the LCBO and was the inspiration to break our Ontario-only rule. I’m a sucker for a good gimmick and a good beer, and I’ve always enjoyed chipotles finding their way into my beer (I’m looking at you, Rogue). A 500 ml bottle is 6.5% and will only set you back $3.60 at the LCBO. But there’s no point hoarding it, as there is a best before November 2015 date printed right on the bottle – not a bad shelf life however. We split this between two white wine glasses. And we promptly jumped into some PC Black Label chipotle salsa as a snack. Suddenly we were on the mend, and boy are we glad we chose this guy as the hair of the dog. This is the first beer I’ve tried from the Ilkley Brewery but they seem to boast an impressive lineup of products, and I’m more than a little curious about the World’s End Islay Aged Chipotle Chocolate Stout.

Aroma: Dark chocolate and malty aroma. My cold is wearing off and I can actually breathe through my nose again, but I didn’t notice any chipotle aromas. Would have liked that, it would have cleared out the last of the sinus issues.

Taste: Light mouth feel with a bitter hoppy flavour. Malty finish with lots of dark chocolate. Still no hot pepper flavour. Maybe I need to lighten up on the Sriracha on EVERYTHING? Have I killed my poor taste buds?

Aftertaste: Hot peppers, there you are! Nice smoky chipotle aftertaste, lots of hops. More hoppiness to the stout than I expected.

Overall: An unexpected gem, until I can get my hands on some of that Sriracha beer that Rogue is producing. Paired wonderfully with the salsa as a snack. We’ll probably pick up another bottle at some point.