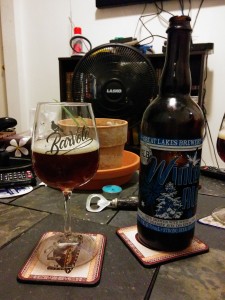 I honestly get sick every year during Chanukah. So you can imagine my frustration when I woke up on the first morning of Chanukah with a cold. I enlisted Kole’s help in making chicken matzo ball soup in the morning so I could breathe clearly enough at night. He had to lend me his nose a bit for this particular tasting, so I shared the Chanukah bounty.

Tonight’s beer is Great Lakes Brewery‘s Winter Ale. At $6.95 for a 750 ml bottle at 6.2% ABV, it’s a reasonably priced seasonal brew. I tried to find some Chanukah beers at the LCBO, but alas I could not find any He’Brew beer in Toronto. I figured Etobicoke’s own GLB would be a good option instead. We split this between two white wine glasses that Bar Volo typically serves their high gravity beers in for optimal sampling opportunities. The consensus is that we should pick up another bottle for cellaring purposes. We’re usually quite happy with the seasonal offerings from GLB.

Appearance: Dark brown with a thin head, rather opaque.
Aroma: Strong aroma of orange peel and hops with cinnamon (according to Kole – I’m too congested to give an honest opinion).
Taste: Sweet flavours of honey, ginger and cinnamon, with bitter malty undertones. Definite cinnamon flavours that would warm up nicely with time if you cellared it.

Overall: A solid option that we’re likely to buy again. One of these would go really nicely on Christmas morning, or a great option to take with you to that Muskoka cabin retreat.