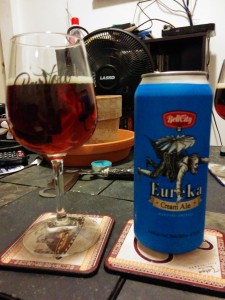 been reading about everyone’s Craft Beer Advent Calenders online, and I’ve been growing incredibly jealous. But wait – if we can have a 12 Days of Beer for Christmas, we can have an 8 Days of Beer for Chanukah, can’t we? I can join in the reindeer games too in that case! I don’t have to be left out of Christmakuh yet again this year. And thus the 8 Days of Chanukah was born. (OK, it was a clever ploy to get Kole to buy me lots of presents this year, and it backfired. I did all the buying.)

To celebrate the 8 Beers of Chanukah, we’re going to try out a new beer for every night of Chanukah. For these posts we decided to pick beers that we (I) thought looked delicious, regardless of where they come from. This time we’re allowing some foreigners into the mix, as well as products from other provinces. Why? Cause it’s our website, and we said so. At this rate it might also become the beers of Festivus, cause that’s more up my alley. If I keep up the 8 Beers of Chanukah, we really will need an airing of grievances… Plus Bell City has a great Seinfeld reference on their website as a suggested food pairing (these pretzels are making me thirsty), so I thought it would be a great place to start.

On the first night of Chanukah, the Toronto Booze Hounds sampled Eureka Cream Ale by Bell City Brewing Company in a can, split between 2 wine glasses. A relative new comer to the Ontario craft beer scene, Bell City was founded in 2013 as a contract brewer in Brantford, ON, under contract to Railway City Brewing. At $2.85 for a 473 ml tall boy at 5.8% ABV, this is a great value option in the 8 Beers of Chanukah. A non-pasteurized cream ale is a bold choice for a brewery to use as their flagship beer, so I was instantly attracted to the can. The can proclaims itself to be a pre-Prohibition style Cream Ale.

Appearance: Dark ruby colouring, creamy head. The head faded pretty fast upon pouring, I prefer my cream ales on tap.
Aroma: Surprisingly hoppy aroma, sweet with lots of caramel.
Taste: Rich and malty taste. Sweet with hints of hops, nice undertones of vanilla and cherry. This is a surprisingly mature and balsy specimen.

Aftertaste:  Malty and bitter after taste.

Overall: Sláinte! L’Chaim! I hope this one pops up on tap somewhere, since cream ales really shine on tap. I like that this is not a timid cream ale. I compare all cream ales to my gold standard, McAuslan’s Cream Ale, and this one is a great Ontario offering.