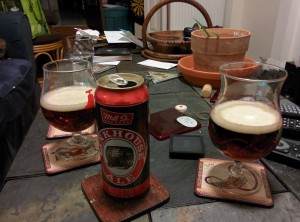 We have done a large number of reviews on this site and somehow we missed one of the most well known craft brewers in Toronto. Located in the Distillery district, Mill St. Brewery (along with it’s brew pub) has been kicking around since 2002 and there wares can be found at LCBO’s across the province.

We decided the first beer by them we will review will be the Tankhouse Ale. This was decided by two things: first of all, it’s a very well known beer and secondly, it was recently released in cans, which is the style we sampled.

Each can sits at an easy drinking 5.2% ABV and you can purchase a 6-pack for $13.45 (when last checked.) We sampled the beer in balloon style glasses, with one can split between the two of us. As for atmosphere, I’m pretty sure we were watching the final episode of Gilmour Girls. Take that as you will.

Appearance:  Deep red with thick head that fades fast. Very clear and filtered.
Aroma: Hops and cherry, a bit metallic and clean.
Taste: Surprisingly soft on the hops with a sweetness maybe vanilla and a little spice. Soft mouth feel. Nice maltiness to it.
Aftertaste: Bitter hops.
Overall: An easy drinking beer that can work in almost any situation.