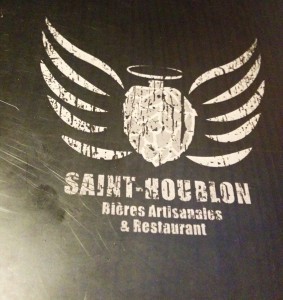 This is our first instalment in our Road Trip Series, cause we definitely love trying new and local products when we travel. We visited Ottawa and Montreal over the Christmas holidays. Apparently it’s been enough years since I moved away from Montreal for the craft beer scene to really explode, and we visited 3 new (to us and new in general) brew pubs. Three! And we were only there for 2 nights!

Le Saint-Houblon (French for Saint Hop, adorable) is a new establishment in the Quartier Latin stretch of Montreal along St-Denis. This neighbourhood is a heavy weight for beer fans. Within a 1 km radius from this bar, there is a sprawling 3 Brasseurs location, L’Amère à Boire, le St-Bock, le Cheval Blanc, and I’m pretty sure Bénéluxe hovers around the 1km distance as well. That hill always throws off my ability to judge distances. This is an area of the city I’ll always visit when I’m around, and I used 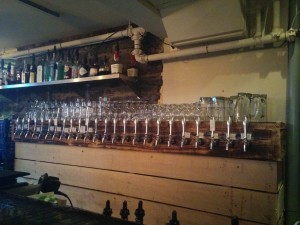 to live a few blocks from this area when I was a wee lass of 18. There’s a lot going on around here – Université de Québec à Montréal has some prime real estate in the ‘hood, CÉGEP du Vieux-Montréal is in the area, and the bus station is just a stone’s throw. We actually walked right by Le Saint-Houblon on our first 2 walks along the block, as we were headed to the always amazing BYOB Grenadine restaurant and onwards to grab a pint of cider at Yer’Mad in honour of a close friend who passed away over the holidays, and truly lived dingy bars. 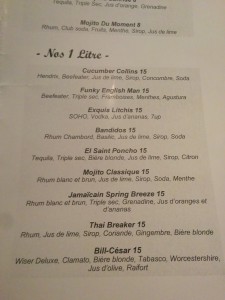 elt compelled to check out Le Saint-Houblon instead of continuing onwards to one of my old haunts, it helped that it was one of the first bars we encountered out of the metro. And what a gorgeous tap set up they have! There are also plans to have an individual tap set up at each table, but on the Friday night of our visit, this was not yet operational. We cozied up to the bar to watch the bar tender hard at work. Although it was a fairly quiet night when we visited, the drink orders were pouring in at a rapid pace. Le Saint-Houblon have a fair extensive and potent cocktail menu, with reasonably priced $15 cocktails. No, I haven’t lived in Toronto for so long that I think a $15 cocktail is reasonable – these suckers were served in 1 litre glasses with an average of 5 oz. of fun stuff per cocktail, and are intended to be split between 2 people. Where were these guys when I was at Concordia? Oh my. 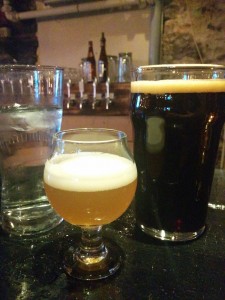 The majority of the pints were around the $5 mark, which given both the prime location and the quality of the pours, we were delighted to make our way through as many of them as we could reasonably consume. Brewing occurs off-site at the moment, under contract brewing at Les Brasseurs Illimités. At the time of our visit, only about 11 taps were operational out of the planned 24. Flavours were bold, refreshing, creative, and exciting. Their hefeweissen came with a frothy head, rich banana and cloves aromas, and was a wonderful palate cleanser. The Scotch Ale had a rich, peaty flavour and packed a really strong punch that left Kole licking his glass clean, and left me communicating exclusively in French and interpretive dance. 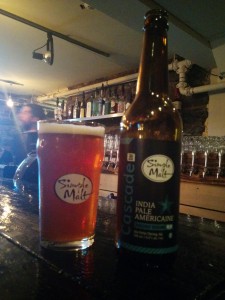 In operation since November, le Saint-Houblon launched under the idea that good taste should be easilyaccessible at any budget. Run by UQAM business students (one was floating around the night of our visit, a fresh-faced undergraduate student with ample energy) in an area prone to a lot of foot traffic, they should fare well with their price point and menu. We did not sample much of the food as we had already stuffed our faces at La Grenadine, but we did sample the fries after seeing mounds of them paraded by. Bistro-style fare takes up much of the menu, and Montreal understand better than anyone in Canada how to offer up good bistro fare. They better still be in operation the next time I visit La Belle Province.