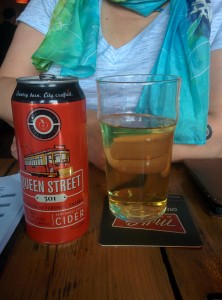 Something interesting that I learned recently is that Brickworks Ciderhouse is not actually affiliated with Evergreen Brickworks in any way.

We’ve been fans of their original Batch 1904 for a while now and when they announced they would be releasing a new cider we certainly got excited. Which is why on a recent trip to TallBoys we jumped at the chance to try it.

Named after the Queen Street streetcar, which I’ve had the ‘pleasure’ of using for a daily commute for quite some time a few years ago, they claim it represents a lot of what Toronto has to offer. In terms of the actual ingredients they say it is a mix of 8 different types of apple, all grown here in Ontario. I am a fan of buying local.

I can not currently find this in the LCBO database but I am told it will be appearing at LCBOs across Ontario. It sits at just 5% ABV.