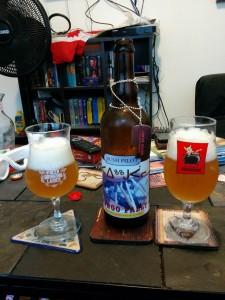 Pengo Pally Saison is the latest offering brewed by Bush Pilot Brewing, a contract brewery that brewed out of Nickel Brook Brewing Co. I was attracted by the dog tag bottle opener that came with the bottle, and the Inuktitut lettering on the label. You see, I’m heading to Labrador next week to visit one of my closest friends, and the lettering made me think of him. Fitting, as Pengo Pally is supposed to be the English pronunciation of of an Inuktitut phrase that translates to “I Miss You”.

This seasonal release is still available in select LCBOs around the province. A 750 ml bottle sits at 6.5% ABV and will set you back $9.95 at the LCBO.

As beer is best enjoyed fresh, our bottle came with a Best Before date of October 2016. I wish more breweries would put a best before date on their beer, to be honest. I’ve seen it on some beers designed to be aged, but never on a saison before. This bevy is brewed with arctic herbs from Nunavik, including crowberries and Labrador tea. The Labrador tea inclusion sealed the deal for me, and I had to try this offering.

Aroma: Strong botanical aroma. I wasn’t sure what to make of it – almost medicinal in aroma.

Aftertaste: Minimal aftertaste, reminds me of the resurgent gose style. No hops to speak of -bitterness came from the botanicals.

Overall: We think this would go with rustic northern Canadian foods. Serve it up with some bannock by your campfire and fresh arctic char or gooseberries. Interesting to try something so different at least once, but I don’t know if I will actively seek it out a second time.