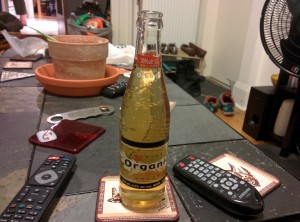 The fine folks at Mill St. Brewery say that their Original Organic Lager is Ontario’s very first certified organic beer. I must admit this is a tad surprising, given how popular organic food is (basically half my local grocer is now organic) I sort of assumed there would be other certified organic beers.

I sampled this brew in the bottle it’s sold in. While I usually use a glass when sampling beer, it seems that the vast majority of people that get this beer drink it straight from the bottle.

On to my tasting notes:

Aroma: Mostly hops but also a bit earthy/grassy. Can pick up hints of the malted barley.

Taste: Much more of that grassy flavour. It’s actually quite pleasant. More malty than I expected in a lager.

Overall: A great simple lager. More malty flavour than expected which was a pleasant surprise.

One comment on “Original Organic Lager by Mill St. Brewery, a Review”