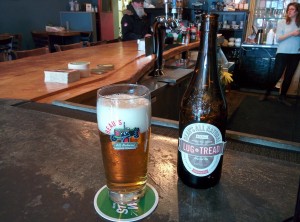 Lug Tread is the flagship beer of Beau’s. In keeping with flagship beers for most brewers it is a super approachable and refreshing beer.

This beer has won quite a few awards including winning gold at the Canadian Brewing Awards 4 years in a row.

The beer itself is made in a somewhat unique way. They start by creating an organic ale (using standard top fermenting yeast) and then they cold store it, which is what one would do with a lager. This means the beer takes quite a bit longer to make than your standard ale (which is generally two weeks).

This process ends up with a beer that is crisp and refreshing like a lager but more flavourful like an ale (not that lagers can’t be flavourful!)

Appearance: Light gold. Filtered. Nice thick head that stays quite well.
Aroma: Very slight but hints at the malts with vanilla. Lots of biscuit.
Taste: Surprisingly flavourful but crisp. The bread-like malts come through nicely. I pick up cinnamon and clove that mingles well. Nice light mouth feel. A few sips in you get more of the fruity flavours, like apple and pear.
Aftertaste: This is when the hops do their job. Nice bite of bitterness on a dry finish.
Overall: A unique take on lagers.