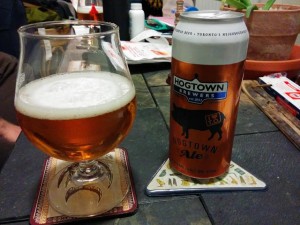 Hogtown Ale is a unique beer in that it’s Hogtown Brewers main flagship and yet it is a kolsch style ale instead of something more common such as an IPA or a pilsner.

This brew was tasted in a balloon style glass (my go-to for most ales) from a tall-boy can which is commonly available at LCBO’s. It was shared with my partner because beer is made for sharing.

Aroma: It smelled somewhat like salted chocolate with a bit of caramel. There was a hint of cherry.

Taste: The caramel continues with a bit of hops to sweeten it up. The mouthfeel is very bubbly and soft, kind of like a pilsner. There is a bit of orange flavouring after a few sips.

Aftertaste: A little earthy and hoppy.

Overall: I’d say I enjoy this. It’s an ale but lighter than you would expect. It has some very complex flavours but none of them are overpowering.