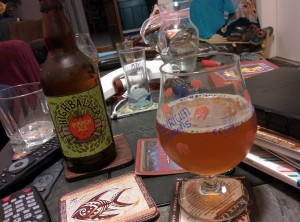 While I am always a bit annoyed that there is suddenly a chill in the air I do love fall for at least one thing: pumpkin.

Everything pumpkin flavoured comes out now and I live in flavour heaven (at least until Eggnog flavoured stuff starts showing up.

Shawna on the other hand HATES pumpkin, so with the shelves full of pumpkin beer at the moment, I’ll be taking on the task of trying to review all of them.

According to the website the pumpkin’s used in making this beer were all grown in the backyard of one Bob Hannenberg, the owner of Grand River Brewing. The beer is available in the LCBO so that must mean they used A LOT of pumpkins. I’d love to see that back yard some day.

The beer is a seasonal that comes out every year and probably shouldn’t be paired with any food. The flavour needs to stand out on it’s own.

Appearance: Dark orange. Off white head. Unfiltered.
Aroma: Hardcore pumpkin and slight sweet malt.
Taste: Pumpkin controls things. The sweet malt adds a nice bit to it and the yeast adds some nice spiciness. The ingredients list ‘spices’ so it’s probably not just the yeast. I would guess some cinnamon.
Aftertaste: Thick and long.
Overall: Heaven.