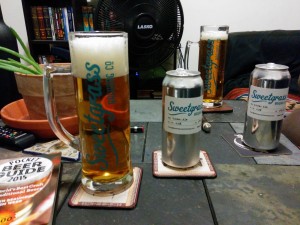 Important Notice: The beer used in this review was given to us free by the brewery. This will not affect the review but we want to keep our readers as informed as possible.

I first experienced Sweetgrass’s Golden Ale last year during a ’12 Beers of Christmas’ event at the Gladstone. They were giving away samples while also explaining what it was and all that. The problem was that it was during the winter and all the other breweries at the event were sampling very flavourful spiced stouts and porters, not to mention the usual array of IPAs. This leads to people with very numb tastebuds. The golden ale is a generally lighter affair with complex flavours, none of which can really be noticed when you just downed a double IPA.

That means my first experience of the brew was not exactly fair. It just wasn’t a distinct enough flavour when sampled after some of the highest IBU beers I have ever tried.

That’s why this review was done in a much more fair way: completely fresh tastebuds.

The beer was sampled using the glassware provided by the brewery. We tried both on tap and from a can. This review will be on the canned variant.

Sweetgrass Golden Ale is not available at the LCBO but can be purchased at numerous places across the city, a list is available on their website (linked above.)

On with the tasting notes: 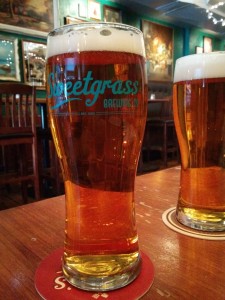 Appearance: Golden in colour as the name suggest, very clear so certainly filtered. There is a bit of copper to it.

Aroma: Not much to smell but there is a hint of hops to it.

Taste: Very subtle, which is why it wasn’t great to taste after some hardcore IPA’s. The flavour is clean and sweet. There is definitely honey and pears. The mouthfeel is soft and bubbly. Reminds me of simple syrup. Light hops on the back of the mouth with a bit of a malty but light aftertaste.

We had it paired with oysters at one point and it worked beautifully. It mingled with the salty brininess of them. It would probably pair well with most seafoods.

Overall: Clean and sweet, soft on the pallet. This would make a great summer beer to be enjoyed on a patio.