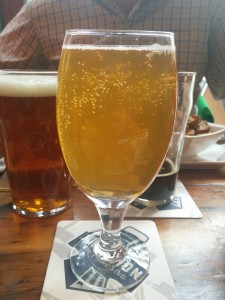 Glorious spring weather returned on the weekend, and we found ourselves seeking shelter at Tequila Bookworm on Queen West to rehydrate our sunburned selves. I found myself immediately excited at the prospect of trying out a new to me hard cider, Empire Hard Cider. I quite like Empire apples in general – tart and firm apples hold up nicely in apple pie without being overly sweet, and they withstand the abuse I put them through on a daily basis in my purse as a mid-afternoon snack. They grow readily in Ontario and are available late September/early October, so you’ve probably picked some at some point. It seems logical to use this varietal in a cider option.

A 13 oz draft 6.4% abv pour will set you back $7 at Tequila Bookworm, and I jumped at the chance to give a new artisanal cider a try amid the rotating tap list of great Ontario craft beers. After all, people watching on Queen West is hard work, and I deserved a break. Based out of Codrington, ON, Empire Hard Cider is based on a family farm and made with an assortment of local apples. Empire is the dominant varietal in the finished product.

Appearance: Cloudy and unfiltered, a deeper yellow than most draft ciders. Thick and even carbonation (yay clean glasses!) that lasted. No head.
Aroma: Tart apple aroma.
Taste: More tart apple flavour, slightly sour bite. I prefer a tart cider over a sweet cider, as it doesn’t leave a weird candy film on your teeth.
Aftertaste: Short apple flavour. Pronounced apple flavour when you burp, not in a bad way!
Overall: Thank you for being tart. I paired it with a smoked salmon platter. The acidity from the apples nicely cut the rich greasy texture from the salmon and cleansed the palate quite nicely. Kole paired a few sips with his pulled pork sandwich and found the balance of tart flavour mixed nicely with the sweetness and richness of the pork. I’d drink this one again, especially once summer patio season starts.