EDIT: The card critique mentioned in this article has been solved, according to Duggan’s Twitter account. Glad to see this has already been addressed, as it put a damper on our moods. We were hangry when we showed up and that made us very cranky.

Thanks @TOBoozeHound! Good news: we accept debit and credit and already have a some brews on the go! Come back soon for round 2! 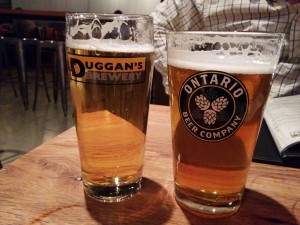 Shawna has told me A LOT about the old Duggan’s brewery. Not the current one, the old one that graced downtown Toronto for a few years. According to her it had a creative beer list, amazing food and a wonderful ambiance. It’s possible that she had some powerful nostalgia glasses on. Now a-days the old location has Beer Academy as a resident.

With all this in mind, when we heard that Duggan’s was opening a new location in Parkdale we got very excited.

The place has been rife with intrigue since the original announcement. For example, they announced at one point that Jamie Kennedy would be the head chef only to have Jamie Kennedy’s PR team inform the public that no, he decided not to take the position.

Before I launch into a review of the place I want to make it very clear that we went during the ‘soft launch’ stage. This means that they hadn’t ironed out all the flaws yet. It’s very possible that many of the flaws I may mention have been fixed up.

When we first arrived at Duggan’s we were put in a bad mood immediately. They were cash only.

While they have an ATM in the building, we don’t like that you are forced to give the restaurant a good $2 just so you can give them more cash. Debit and credit makes it so that if I accidentally drink more than I realize, I can still pay for it. With cash I don’t have that option.

After we got some cash out we seated ourselves (not sure if this is always the norm, but it seemed like a slower night) and started in on the complementary onion rings (2) they gave us while we went over the menu.

The beer selection itself was exactly what you would expect from Duggan’s. They have their regular assortment of Duggan’s beer including the famous no. 9 and a few 100 mile ale offerings for good measure. The variety of flavours really isn’t too exciting with quite a few lagers available. It’s possible that I’ve become too used to the unique and very weird flavours of Indie Ale House and Bellwoods Brewery.

The website does promise one-offs and other beers that will only be available via the brewhouse, so the beer list could get much more interesting with time.

It’s possible that we were a bit hangry at this point. It was 8 and we hadn’t had dinner yet, could you blame us?

This was when the food arrived and we felt A LOT better. 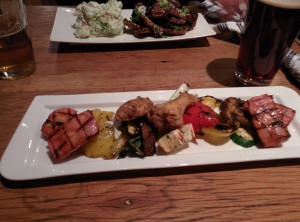 Personally I had a tasting platter that included some chorizo sausages and Thai style shrimp, Shawna had beef ribs accompanied by potato salad. The food was absolutely delectable. Every bite was an experience. I give the brew pub full points for the grub. Not to mention the prices were very reasonable for the portion sizes we were given. The average menu item is under $15, so you can’t really argue with that.

On your way out you are offered a chance to buy a growler of beer. The main issue with this is it’s cash only and we didn’t feel like taking out another $40 (with a $2 charge) just to buy a $24 growler.

The place is rather large and I can foresee some very cool events taking place there. There is a large TV in the back that could be used for fun such as trivia or video games and it can certainly be rented out as a very cool event space. Right now though it seems like a large empty place. With more people it may not seem so blank.

In the end I would say the place seems incomplete. While it shows some signs of being cool, it will take a few tweaks and a much more interesting beer list to get us to come back. With the wonderful Rhino right across the street it’s going to be really hard to compete.