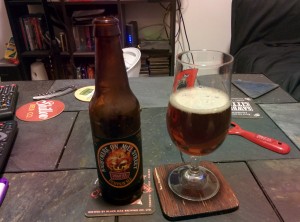 With fall comes the attack of the pumpkin ales. I’m not complaining though, I absolutely love anything pumpkin flavoured.

While Mill St has gone the way of the Goose island and gotten itself purchased by a major player, this beer at least would have been produced before the purchase. Not to mention with how long in advance you have to send samples to the LCBO, the basic recipe was probably made before even talks of the sale were started.

On the Mill St site the brewers notes say he didn’t know how to go about making this beer and based it on a pumpkin pie recipe, not sure how much confidence this gives me.

You can purchase this beer as a part of their harvest sampler which is $13.65 right now. The pumpkin ale sits at 5% ABV.

Appearance: Basic Ale. Ruby coloured. Filtered.
Aroma: Soft caramel and pumpkin.
Taste: The pumpkin takes over at first but then caramel and toffee show up and mellow things out. A tiny hint of bitterness at the end.
Aftertaste: Short and dry.
Overall: Not bad. Solid pumpkin.