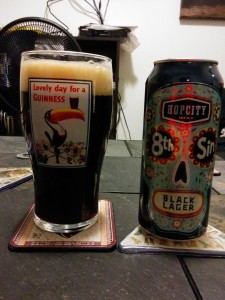 Lagers are usually crisp, light filtered beers without much complexity. There’s nothing wrong with a lager, but it’s not my go to beer. However, it is a big player in the beer market outside of the craft beer movement, so I thought I would give some attention to a lager.

Except I’m a rebel – and I chose 8th Sin Black Lager by Hop City to sample. I was lured in by snappy packaging, and the fact that Guinness is dominated by more of a lager profile with a creamy head from the nitrogen. Schwarzbier is a German style of dark beer without all of the forward notes you’ll find in a porter or a stout, a nice gateway beer if an Imperial Stout is still a bit too intimidating. This particular black lager is brewed with a nice salad of 8 malts: Pale 2 Row, Roasted Barley, Chocolate, Carastan, Crystal, Dark Crystal, Munich, Torrified Wheat.

I was expecting something very light on the palate in typical lager style, but there was a lot of complexity in this can. I’m snarky so I served it in a Guinness pint glass.

Smell: Surprisingly hoppy aroma for a lager, but the brewery does boast the name Hop City after all. Faint biscuit notes.

Overall: Interesting spin on a lager. Suitable for early spring patio sessions. I would pick this up over other lagers out there, but it won’t be my first instinct to select it. Distinctive packaging helps – I feel like I can ask my co-worker to go pick up the lager with a sugar skull design on the can and they will come back to the office with the right choice.