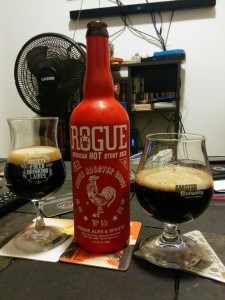 I love Sriracha even more than I love other people cooking potato latkes for me. I have a bottle of it in the fridge at work with a passive aggressive note taped to it, since I put it on almost everything. I stockpiled Sriracha during the scare a few years ago – when we thought the plant was going to shut down. So you can imagine how excited I was to get my hands on a bottle of Rogue Ales & Spirits Sriracha Hot Stout. In fact, I was so determined to get a bottle, that before it was released in the LCBO at $12.25 for a 750 ml bottle at 5.7% ABV, I managed to get my hands on a bottle that was ninja’d over here from a friend in Seattle. This friend lugged it with him from Seattle to Montreal, where we are both originally from. But we weren’t in Montreal at the same time, so his younger brother lovingly stored it for me for a few weeks until I could come down and cart it off to Toronto. We met in front of Mont Royal metro station and it felt like an illicit drug transaction. Happy Chanukah to you in Seattle, Eitan!

Rogue is known for their bold flavours, and this is not the first time they have made a spicy brew. I’ve tried their chipotle beer and their jalapeno beer – and I remember the jalapeno option blowing my mind years ago. The creamy sweetness of a stout pairs nicely with spicy flavours, just like a good piece of Mexican dark chocolate works well with hot peppers in it. There were 6 bottles of this stuff left in LCBOs in the province, so good luck getting your hands on some. I think it will be back.

Aroma: Toasted coffee notes, dark chocolate, a bit of anise, and a definite clearing of your nasal passages from the Sriracha.

Taste: Malty sweetness on the backbone typical of a stout, with more coffee and a cinnamon effect on your tongue from the distinct spiciness. My tongue tingled a bit after I swallowed. A bit of umami happening with this beer.

Overall: We recommend serving this on its own so you can experience the layers of flavours on their own. It’s a novelty, sure, but who cares? I can now say I put sriracha on everything, even beer. Impress your Zaida with this one at your Chanukah party.