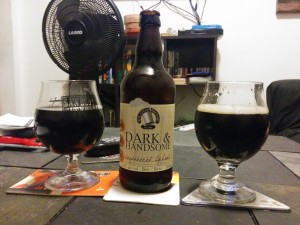 “Why don’t you try to meet someone dark and handsome?” sounds like something my Bubby would have said to me when I was in my early twenties, if she was having a lucid day. If she were still around today, I’m sure she would be frantically trying to introduce me to her friend’s single grandsons, like all nice Jewish grandmothers do. They cannot help it.

We first encountered Dark & Handsome by Trowbridge, UK brewery Box Steam Brewery at our neighbourhood watering hole, Dave’s on St. Clair while we were taking Beer Appreciation at George Brown College last winter. I was lured in by the name. A 500 ml bottle retails for $4.30 at the LCBO and weighs in with a well-rounded 5% ABV. My handwriting is particularly illegible on my notes for this brew, I guess Chanukah is really getting to me this year.

Aroma: Dark chocolate, black currant and a hint of anise.

Aftertaste: My tongue felt a little numb this time when I drank it. Sweet finish with strong black liquorice aftertaste. I like black liquorice, but not everyone grooves on it.

Overall: I was feeling a touch dramatic when I wrote my notes. Apparently I recommended serving it with Bubby’s brisket, a dreidl, and an ability to ward of Bubby trying to pair you with a nice young doctor/lawyer/engineer.