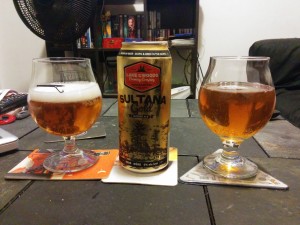 I wonder what craft beer my Zaida would have consumed if he were still alive. I don’t really remember him drinking very much of anything, but when he did have a beer, it was always a golden ale. He definitely never made it to Kenora, ON, where Lake of the Woods Brewing Company brew their Sultana Gold Blonde Ale – some 1,868 kilometres from Toronto. Welcome to Ontario’s most northern brewery, a mere 51 kilometres from the Manitoba border. It’s closer to Minnesota and North Dakoda than Toronto. Pretty badass. It’s also named after a gold mine.

The original Lake of the Woods Brewing company was founded in 1808 and brewed until 1954, shutting down when it was unable to compete with the big brewers in Ontario. The brewery reopened in 2013 after a 59 year hiatus in Kenora. Welcome back! The Sultana Gold is one of the new flagship beers. A 5% ABV 473 ml can will set you back only $2.85 at the LCBO, so you can take your dreidel winnings and buy a can. Don’t be a cheap shmo.

Appearance: Deep golden copper colour, filtered. Medium head that faded pretty fast in one glass, but not in the other.

Taste: Salty on the palate, with hints of citrus. A grassy taste – it evokes images of the prairies.

Overall: Would work as an affordable beer at your Chanukah party, good for the friend who asks what “normal” beers you might have. Serve with your aunt’s potato latkes (with sour cream, you shmuck). At $2.85, you cannot really complain – it delivers exactly what you would hope for.