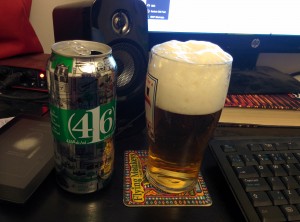 Amsterdam’s (416) Local Lager has one of the best can designs I have ever come across. It features beautifully illustrated images from around the city and a wonderful green colour scheme.

The name itself (416) comes from the area code for Toronto. At least, the oldest of the area codes. Now a days it’s a tougher one to get. I personally have a 416 number and I am not giving it up for anything.

Amsterdam says that this beer is brewed FOR the city they are based in but don’t really elaborate on what that means.

As you can see in the photo I poured this (rather poorly) into a simple pint glass (from our friends at Guinness) and didn’t share at all!

The local lager comes in at 4.16% and can be purchased direct from Amsterdam or at LCBO’s across the province.

Aroma: Almost none to speak of, which is common for a lager. Bit floral.

Taste: More fruity than expected. Light as you would expect a lager to be. Almost no hops to speak of. Maybe a hint of citrus?

Aftertaste: Crisp. No other way to describe it. Bit of barley at the back of the mouth.