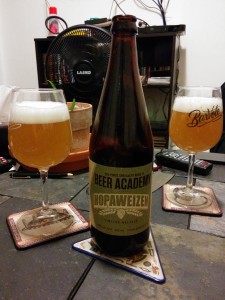 Tonight’s Hopaweizen by Beer Academy (website already defunct following this week’s announcement that they are closing up shop) was a last minute, late addition. Don’t worry, the mystery beer that we planned for tonight will eventually resurface in a later review. Possibly a Festivus review? Time will tell. But with this week’s announcement, we realized it important we review something from Beer Academy before the opportunity was lost forever. This is one for the history books, folks. As of today, there are still growlers and bottles available on site, but who knows how long supplies will last? For collectors, merchandise is 50%.

The Hopaweizen appears to be an experimental beer style entirely belonging to Beer Academy. Part Belgian-style Hefeweizen (think Hoegaarden) and part hoppy IPA, it’s a neat style. Or it was a neat style. Whatever. It was an innovative product, and part of me is frustrated that I am describing an Molson owned product as innovative. I picked some up this afternoon on a beer run from the office, and I’ve got another bottle hidden in the employee fridge with a discreet post-it note indicating that it’s mine. Back off guys, get your own beer! Available while quantities last until December 30 at $25 for a 4-pack, mix & match 625 ml options. The label lists it at 4.7% ABV on one side and 5.8% ABV on the front label, so I’m not sure which one is accurate. At 31 IBU, it’s also not the hoppiest beast out there. We split this between 2 wine glasses.

Appearance: Opaque golden straw-like colour with a proper thick Hefeweizen head on the pour. A Hefeweizen in an IPA’s clothes?
Aroma: This week’s cold is still kicking my butt, but I’ve recovered some of my sense of smell. Smells very hoppy.
Taste: Definitely the distinctive banana and clove flavours definitive of a Hefewezien. Less citrusy flavours than expected, and also less sweetness. Definitely not as bitter as a Hopaweizen branding would suggest, which matches the IBU mentioned above.

Aftertaste:  Orange peels. Was hoping for a hoppy after taste but it wasn’t very pronounced, definitely not bitter.

Overall: Enjoyably different without being true to either style. I wonder if this style will be resurrected by anyone else?