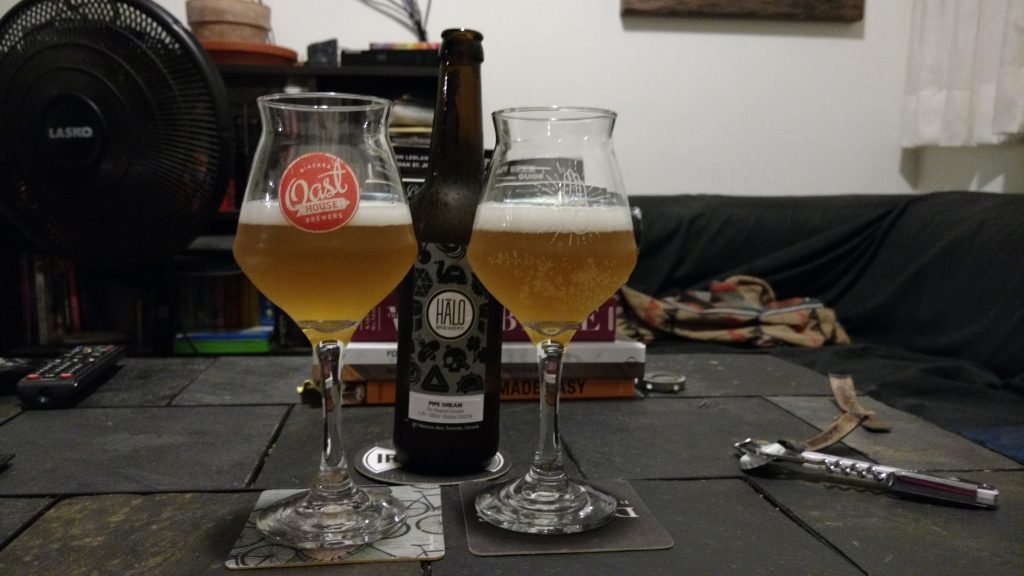 The last time we wrote about Halo Brewery, they were a year away from opening. Now they have a tiny taproom on Wallace Ave, cranking out solid American and Belgian style beers and lip-puckering sours. They are also a featured stop on the west end Craft Beer Passport this year, and they are giving back to the craft beer community at large by publishing their recipes and brewing process on their website. It’s a great space to pop into if you are thirsty before 9 p.m.

We snagged a 500 ml bottle of the Pipe Dream Dry-Hopped Grisette (approximately $6 a bottle – I lost the receipt). I was intrigued by this 4.9% ABV curiosity, weighing in at 27 IBU. Grisette is not a well-known style. The name comes from the French word for grey (gris), and denotes a style of drab grey clothing worn by French farmhouse workers, slinging beer for the the French mine workers (also covered head to toe in grey from their labour). It’s essentially a light farmhouse-style saison – easy drinking and pairs well with hearty French food. Sounds like a winner to me. There are a few breweries in Ontario producing seasonal grisette offerings. After a few on tap at the brewery, a bottle found its way home with me to evaluate on a clean palate.

Suggested pairing: Great on its own on a hot day, or use it to cleanse the palate on a fattier, full-bodied dish like duck breast, chicken shawarma, or gouda.